Hi, everyone. I'll be moderating a panel with the New England Horror Writers next Saturday, October 3, 2015, from 10:30 - 12: 30 in Lancaster, MA. See below for all the information, and list of my fellow writers who'll be attending. If you can make it, it'd be great to see you. The link to the event, as well, is here: 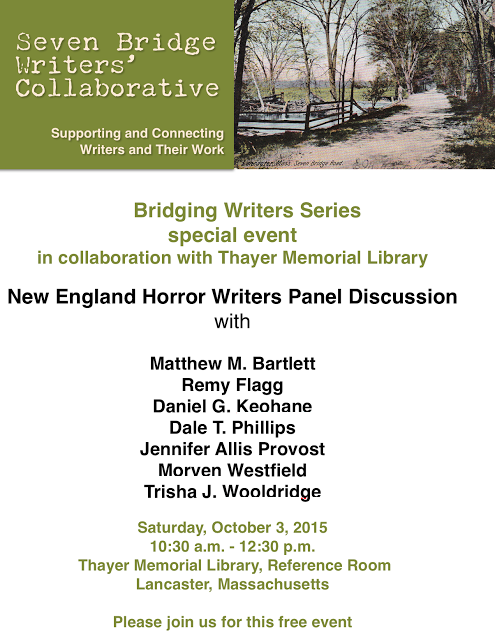 Posted by Daniel G. Keohane at 5:27 PM No comments:

Publishers Weekly Review for the upcoming (Oct) novella collection in which my and L.L. Soares' NIGHTMARE IN GREASEPAINT opens. It's a pretty good review - and my first (I think) Publishers effing Weekly appearance!
http://www.publishersweekly.com/978-1-61922-613-5
Posted by Daniel G. Keohane at 5:44 PM No comments:

So, remember when NIGHTMARE IN GREASEPAINT, written by me and L.L. Soares was released in May as an ebook? Well, the plan is for this novella and three other awesome titles in the series to be packaged in print as one collection, called CHILDHOOD FEARS. It's coming out next month from Samhain Publishing, but isn't yet available anywhere for pre-order (the kindle version of the collection is, but it's priced more than if you just bought the 4 novellas separately, so obviously things are still in flux). I got my author copies in the mail yesterday and it looks awesome (picture is a bit washed out but trust it, it's a gorgeous product, in its creepy way). 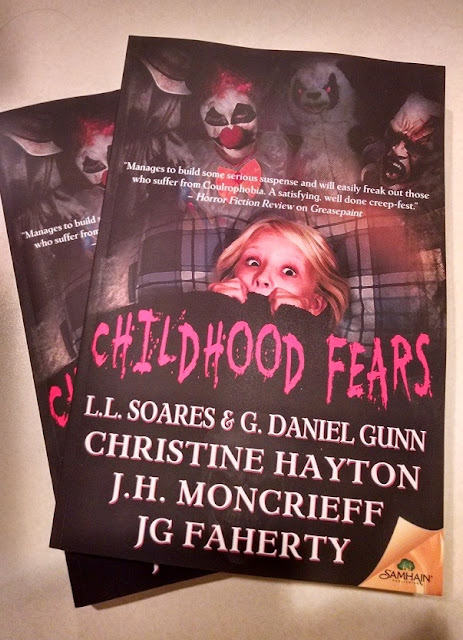 Posted by Daniel G. Keohane at 5:49 AM No comments:

I recently sent out a newsletter. Normally I archive them here, but there's so much going on, including some upcoming readings / signings, I'll post it here, too....

Hello. Been a long time since I’ve sent one of these out. Will get right to it, and will try to keep it brief. I’ll put the timely ones first so you can mark your calendars. Been a busy few months….

I’ll be doing a reading and signing with other members of the New England Horror Writers in Lancaster, MA

I’ll also be speaking to High School English class this Thursday, September 10th, at St. Peter Marion High in Worcester. A number of students chose Margaret’s Ark as their summer reading project and we’ll be doing a Q&amp;A with the author (aka Me). Should be fun. Thanks to Dawn VanRiper for setting this up.

My horror novella written under my horror pseudonym G Daniel Gunn and co-authored with L.L. Soares, is available currently as an ebook at all major outlets (Amazon (http://goo.gl/jc9iZ4 ) Barnes &amp; Noble (http://goo.gl/LUqGyV ) or anywhere ebooks are sold), and sells for less than three bucks.

The printed version, containing our novella plus three others, is slated for early October under the name CHILDHOOD FEARS. I don’t see it available for pre-order just yet, but hopefully coming soon

If you’ve read and enjoyed it already, consider leaving a review! The more reviews a work has the better the retail outlets usually list them

On June 1st of this year, the New England Horror Writers released our third anthology of short stories, called WICKED TALES: THE JOURNAL OF THE NEW ENGLAND HORROR WRITERS, VOLUME 3. I don’t have a story in here, rather, I co-edited the collection, along with Scott Goudsward and David Price. It’s an amazing collection of stories from New England authors, with an introduction by Chet Williamson and awesome cover art by the artist Ogmios.

PLAGUE OF DARKNESS
M most recent novel as Daniel G. Keohane is still available. It’s gotten some nice reviews but could always use some more. If you’ve read it, why not leave a review, let others think, good or bad. I’ve thick skin.

Some MARGARET’S ARK news coming soon: in negotiations to create an Audio book of the novel. More as it progresses, but this should be cool when it’s completed later this year.

My latest novel-in-progress, a rather unique horror novel written as G Daniel Gunn, is called (for now) LOST IN THE WOODS. Still working to finish the first draft and type those ever-elusive final two words: THE END, hopefully soon. More as this progresses.

I’ve a number of Movie Reviews out, most recently for the blockbuster action film MISSION IMPOSSIBLE – ROGUE NATION (2015) and the independent sci-fi film LOVE (2011). Coming soon a review of the awesome family movie MR. PEABODY &amp; SHERMAN (2014). For a full list of reviews you can visit (http://dankeohane-reviews.blogspot.com/)

“My Dearest Gwendolyn,” a short story, is coming eventually to the shared anthology MADHOUSE, once all contributor copies are signed. Currently the sig sheets are traveling the country.

OK, that’s about it. Hopefully I’ll be better about sending these out more often. Of course, I’ve said that before.

Dan
Posted by Daniel G. Keohane at 6:16 AM No comments: