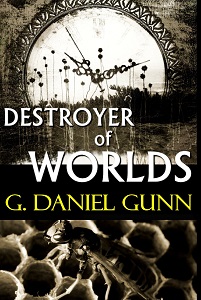 As I build this new website, thought I'd offer some free reading: the opening chapters of Destroyer of Worlds, below. Enjoy. If you like what you read, consider buying a copy here.

Hank Cowles enjoyed Saturday mornings, especially the hour just before noon. People-watching. An odd pastime for one of his ilk, but it gave him an ironic sense of belonging. Here he was, an old man, sitting in a wobbly folding chair on his front lawn, watching families scurry to the next big event in their vans and SUV’s and feeding his fascination. On occasion, Hank would attend Saint Malachy’s church, sometimes even served as usher. He loved that, passing the collection basket from one cheapskate to the next and watching them squirm when he lingered beside their pew after they dropped in a measly dollar or two. Not that he gave two shits about the church, he just liked screwing with the people inside.
“Fucking crow-bar wallet heads,” he muttered. Nurse Charles looked up from her spot beside the chair, decided he’d only been talking to himself and laid her small head back onto her paws.
Fucking crow-bar wallet heads, Hank thought, smiling. Amazing what nonsensical gibberish came out of his mouth when he wasn’t being careful. But he enjoyed the nuances of human language. Cursing, especially. Something therapeutic about telling a person to fuck off and get away with it for no other reason than that he was a doddering old man who probably didn’t have complete use of his faculties.
The sun was hot. Hank ran both hands over his face and balding head to wipe nonexistent sweat away. He did not perspire, not unless he chose to and as a rule he did not. Still, his palms were cool against his overheated scalp and he did enjoy touching himself. During these rare, hot, New England summer days someone invariably walked past on their way to the Greedy Grocer  – one of six ridiculously small shops crowded together in Hillcrest’s only strip mall – and commented that perhaps he should spend a little less time in the sun. He particularly looked forward to that idiot Josh Everson who managed the Grocer. The kid would drive past on his way to check up on his unreliable employees. If Hank was out front, he’d stop his car dead center in the road (something only possible in a sleepy little town like this). The moron would wave, look at Nurse Charles and ask how Hank’s little “Shit Sue” was doing. He never spelled it out, but Hank heard it in his voice, in his mind. The kid was insatiably amused by the dog’s name, but made it a point never to ask how she got it. Hank would never tell him, anyway. Still, of all the assholes in town, Everson was OK. Nurse Charles wanted to rip his balls off with her little teeth, but she wouldn’t. Not if Hank didn’t want her to.
No sign of him this morning, and that was fine. Hank had other matters to ponder. The wasps kept zipping past, telling him over and over, ad fucking nauseam, that the game was afoot. The clock would soon be ticking. That probably meant Vanessa would be making an appearance soon. She always did. Key in hand, Corey Union would get things moving along quickly. No wasting time, putting off what could be done tomorrow, no, sir. He wasn’t that kind of guy.
Hank opened his eyes and laughed softly. Nurse Charles continued to lay on her paws and pretended to doze, dreaming of death and blood and pain and...
...and the same shit he, himself, had begun to dream. Last night, only a snatch of memory remaining of a bright white cloud burning into orange, then red. A close up of one child’s eye widening in wonder, then terror at the sight...
The Shih-Tzu growled.
“Yea, yea, fine,” Hank muttered. “What do you care?” He closed his eyes again and turned his face towards the sun. “It’s a beautiful summer day, Charlie, and hot. I’m allowed a little reflection.”
The dog did not reply.
Hank lowered his head, waved absently as Agnes Lewis drove by in her LeSabre. She didn’t see him, too intent was she on not quite remembering which side of the road to drive on. Looking at Nurse Charles, Hank decided, Tomorrow, maybe. Or the next day. They’d go for a walk across town and pay a visit to the nice family who had bought his property. Between the dog and the wasps, he’d keep tabs on them, including Vanessa, and make sure the clock was wound and kept on ticking....