Well, less than two and a half weeks until Christmas and, to be honest, I haven't done a lick of shopping yet. Not a thing.

Well, not quite true. There was one gift sitting in my Amazon 'Save For Later' bin which I tucked into the checkout when buying something else. So there's that. But miles to go before I sleep and all that. No, not true, either. I'm typing this right before going to sleep, so I suppose our mileage may vary.

Been doing my damnedest to write every day, and I've mostly succeeded. Working on the fourth draft of Lost in the Woods and still like this, a lot. It's different, and fun, and funny, and scary (I hope). Funny thing about fourth drafts for me - since I tend write in drafts (regurgitate the story as it comes to me first time, no edits, then clean up the big messes in the second, begin to see some decent light shining through the holes in the ceiling on the third). There's still, and always will be, tweaks to the writing, a better word here, less words there, stupid why did I think that was clever there (this last point could be the topic for an entirely different post, but let's try and stay on point a little, at least).

Other fourth draft discoveries are patching the holes in the characters' physical world. For example, my main character David Pilkinton leaves one location wearing no coat, in the dead of winter (good reason for this) but in a later scene we return to him for a good ten minutes outside without the narrative reminding us he's friggin' freezing, and needs to get inside. I had to remind the reader and make sure everything he does outside of the toasty car is realistic. Stuff on the counter that was somewhere else, even a little, when he left the cottage better be in the same place when he gets back, unless its deliberate. That kind of thing. 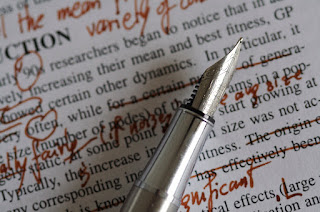 Getting close to finishing the draft. Then, knowing I won't find much at all in later drafts if I keep editing online, I'll print off the entire manuscript, read through with new eyes (because at this point my brain is too used to seeing the pages on the screen and doesn't even read the words). Having to read in a different medium forces me to actually read it and more crap jumps out at me.

I actually enjoy the act of revision. Fun to see a good, professional story take shape out if the miasma of my mind.
Posted by Daniel G. Keohane at 4:57 AM No comments:

A rambling treatise on dreams and nightmares

I've been having a heck of a lot of elaborate dreams lately. I hesitate to call them nightmares, though they usually turn dark near the end. The other night I was dreaming of being in a... Why does my phone capitalize the next word after ellipses? They're pauses, like commas. If I did four dots that'd be different.

When I sleep I expect to rest, not have to deal with anything more complicated than adjusting my pillow or getting up to pee. And the occasional night where my two year old son has nightmares or falls out of his Thomas the Tank Engine bed. Instead I spend my quality REM time with an elaborate cast of characters dancing through sweeping plots usually revolving around work (my dream-version of work, as in I always seem to work in a specific high-rise tower at the outskirts of a nameless city, same building all the time, and as far as I can tell unrelated to my actual, waking job), or home (my usual dream home, which always seems to be under construction and I often discover new rooms I didn't even know I have).

Maybe my life is getting crowded in the waking world - not necessarily a bad thing. There are some amazing people in my life, between family, friends, church and fellow writers (these last three are interchangeable, of course). Years ago, when I was going through my divorce, I often dreamed of looking out my back window and constantly finding construction crews tearing up my yard and the woods beyond. Dream interpretations explain that's normal - it's your brain dealing with major changes in life.

Now, my dreams don't find me fighting with construction crews ripping up my yard, though I still find new rooms I'd 'forgotten' about. The latter sounds optimistic... There it goes again.... Sorry. Optimistic because of new opportunities coming my way. Life is good. No complaints, even if my dreams are getting crowded and invariably twist around to fearsome moments of terror at the end. I always wake up before the monsters or demon children kill me, so there's a happy addition to the thankful list.

Not sure the point of this post, except to poke my brain in and say hi, share a little something other than writing news. But dreams, and nightmares, are early drafts of something that might end up on the page. If not the disconnected, stream of conscious events these usually end up being, then at least their atmosphere.

My very first horror story, originally titled "The Basement" and which later was enlarged to the novella with Lauran Soares Nightmare in Greasepaint, was originally inspired by a recurring nightmare when I was a kid. I was teased my this short little clown who would wait until Mom was in the bathroom and could help me, then he'd insult me. And I couldn't hit him, because he was smaller than me. What? I was five. Later, I learned that my brother Joe would have nightmares if a train passing by him at night, with an evil clown hanging from the caboose, slowly swinging a dirty lantern and smiling at him. I've known for years I needed to use that one, as well, and eventually incorporated it into my new novel (almost done), Lost in the Woods.

I've been trying to take notes on details of my more recent dreams. All of it, fodder for something new, someday.

I'll still whine about them, on mornings when I wake up tired - mentally at least - after a full night's sleep, but we all need them. Exhausting as they sometimes are.

Posted by Daniel G. Keohane at 6:55 PM No comments: